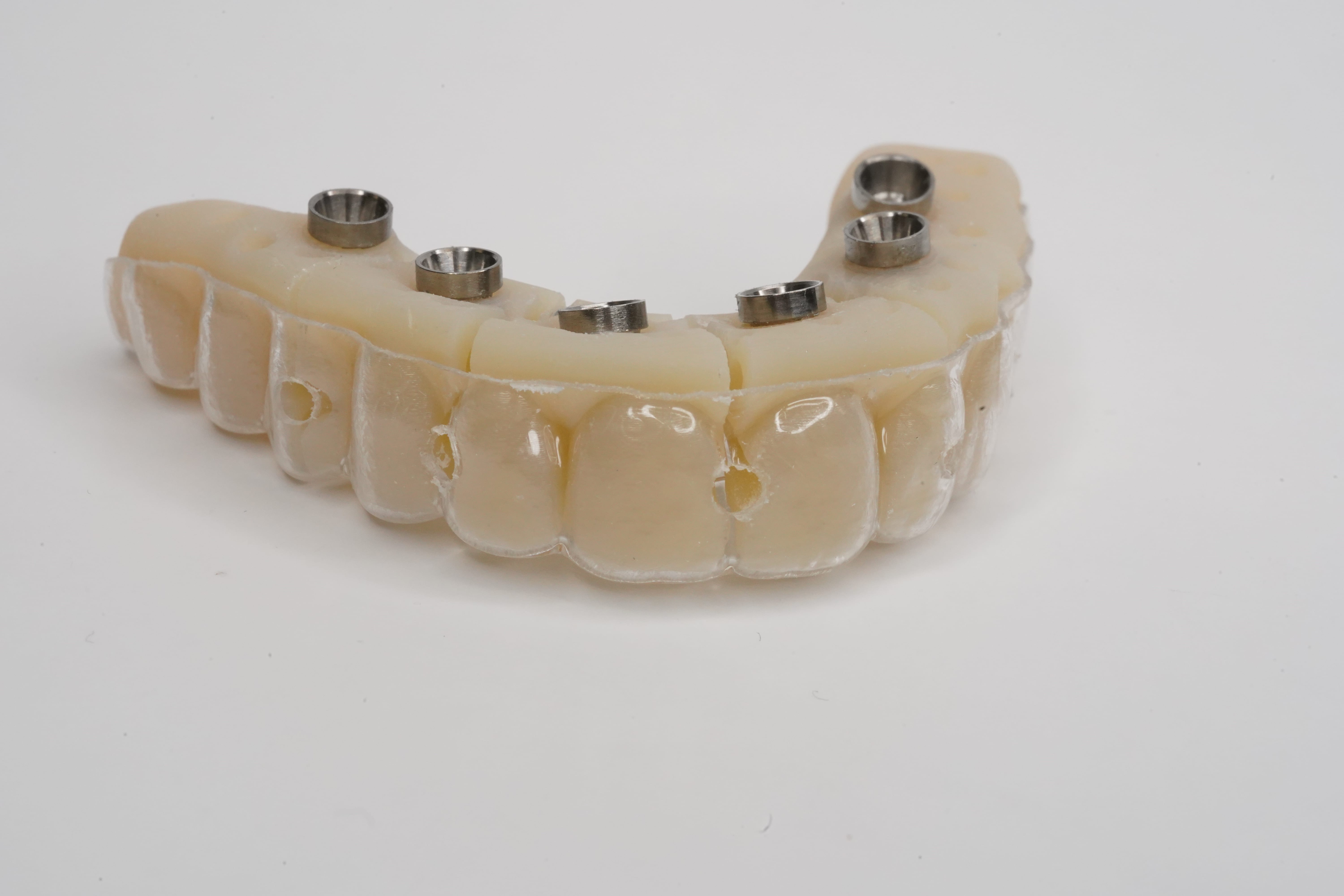 iJIG is a simple tool to send the full arch records to ROE. iJIG provides implant position, tissue architecture, tooth position and bite, all in one appointment. Simply purchase iJIG scan analogs (scan flags) for just $22 apiece (resuable), screw them into the prosthetic and scan.

With the existing prosthetic removed, make your first scan of the CHROME arch, capturing the tissue and MUA’s. This is key to a great iJIG. Then, completely scan the full prosthetic with the flags screwed in, outside the mouth.

Once scanned, re-seat the appliance and scan the opposing and bite. With these simple records, and full smile photographs, ROE will fabricate the iJIG and send to you to screw down, lute together like a verification jig, reline with PVS, equilibrate, capture a new bite, and return for a Printed Try-In. This technology may just blow you away!

The RAPID Appliance is the simplest method of transferring CHROME records to ROE. During surgery, once the surgical prosthetic is picked up, a second set of temporary cylinders are connected to the MUA’s and a second tooth-colored appliance is picked up.

This second pick-up, called the RAPID, is held for months until the time of conversion. At that time, the surgical prosthetic is removed and the RAPID(s) is seated, equilibrated, relined with PVS, and returned with a new bite and opposing, and photo.

If the RAPID is very close to being a final prototype, then go to final. If you’d like a try in, then it is included with CHROME. Could there be a simpler method of going to final? Certainly beats the 7 appointments with denture conversion.

If a RAPID was not picked up during surgery, simple remove the surgery prosthetic from the mouth (or any prosthetic for that matter, not just from CHROME surgeries), screw down MUA replica model analogs, set them in stone with the prosthetic attached and let set.

Once set, simply mold lab putty over the prosthetic and let set. Once set, unscrew the prosthetic from the stone model, re-seat in the mouth, capture an opposing and bite, and return to ROE with the flask and a few smile photographs. With this information, ROE will return the RAPID Appliance for you to equilibrate, reline with PVS, and return for a prototype, or perhaps a final. This works with any full arch prosthetic on MUA’s…. a marvelous technique!